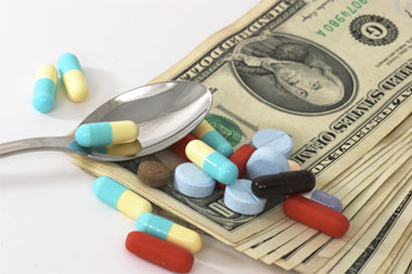 “More and more in the U.S., people are making choices between a bag of groceries and a medicine, a copay. The long-term sustainability of the industry and our ability to deliver breakthrough medicines requires us to demonstrate value.”

Many of our In Focus readers have management responsibilities that go beyond their companies’ healthcare plans and extend into the qualified plans arena, most frequently with their companies’ 401(k) plans. Typically, the concerns of healthcare and 401(k) plan management don’t intersect. But in March, in a Boston hotel room, such an intersection did take place. It’s an intersection that may make a difference to how benefits managers and their prescription drug plan members will be urged to perceive the value proposition of prescription drugs.

The intersection we’re referring to was a meeting between mutual fund executives from Fidelity Investments, T. Rowe Price Group Inc., Wellington Management Co., and others with senior biotech and pharmaceutical manufacturer leaders and their lobbyists. The point of the meeting was for the mutual fund executives to urge their pharmaceutical manufacturer counterparts to do a much better job defending their industry. The mutual fund representatives warned that unless Big Pharma gets a new message out persuasively, the path would be open for Congress, if not Presidential candidates, to attempt some form of price restraints.

If benefits managers doubted that their and the public’s outrage over drug manufacturers charging exorbitant prices on new drugs like Sovaldi and really old drugs like Tetracycline was having any effect, this meeting was proof positive that Big Money got the message. However, it was not proof that mutual fund executives are worried that your drug plan and plan members are paying too much for prescriptions. Instead, it’s that mutual fund shareholders have suffered from the vocal criticism. The mutual fund execs pointed out that The Nasdaq Biotechnology Index is down by 34% as of May 10 since its all-time peak last July, before the intense scrutiny from politicians began. By comparison, the S&P 500 is down by 3.3% in the same period.

On average, the mutual funds represented at the meeting hold around 20% of their funds’ assets in healthcare stocks, and drug companies are a large portion of that. So, a big drop in an important segment of their funds’ value is not the kind of thing that makes 401(k) plan sponsors delighted they chose Fidelity or T. Rowe Price as their fund manager.

At the meeting, the mutual funds urged drug industry executives to justify their pricing by educating the public about the value that medications bring to the health-care system. They also encouraged them to expand on that message by using new pricing models such as “pay-for-performance” contracts. These are financial arrangements, by which PBMs and insurers receive differential discounts and rebates from drug makers based on how well medications work.

The drug industry is not only listening to the mutual funds, but acting. PhRMA has already set up a new dedicated webpage called “Costs in Context” with infographics and “fact” sheets. Here, and probably to come in mass media advertising, we are told, “The WSJ published another story on prescription drug spending that cherry-picks Medicare data in an effort to compare U.S. prices to other countries. This story advances a misleading narrative.” And, “Every additional dollar spent on medicines for adherent patients with congestive heart failure, high blood pressure, diabetes and high cholesterol generated $3 to $10 in savings on emergency room visits and inpatient hospitalizations.” (Could be time for a fact check – at least as it relates to employer sponsored health plans.) Benefits managers have seen this sort of thing for years. Our plan members will soon enough be similarly pitched.

The Biotechnology Innovation Organization (“BIO”) also joined in with its own advertising campaign, “Time is Precious.” It goes right after our plan members’ heartstrings:

“Another decade with a spouse; a few more years with your best friend; a rich, full life rather than one cut short — how do we place value on these? “Today’s breakthroughs in biopharmaceutical medicines are delivering more than stunning outcomes, more than cures. They are giving us hope.”

We may sigh, we may smirk, but this stuff often works. Will we soon get emails from plan members saying, “And don’t you dare put my hopes in Tier 4!” Why doesn’t big pharma promote palliative care over usual oncology care, since the data shows individuals suffer less and live 25% longer? (More on this topic next month.)

If these promotional efforts seem puffery, there is more to it. The pharmaceutical industry has long employed a business model that focuses on volume and price, regardless of the health outcomes of patients. In the hope that it will curtail drug spending, insurers and PBMs have been pushing manufacturers away from that model toward “value-based” arrangements. And drug companies are willing to work with them. Cigna, UHC, Express Scripts, Humana, Harvard Pilgrim Health Care and others have entered into “value-based” pharmaceutical manufacturer arrangements in recent months. For example, Cigna will pay Novartis based on how well the drug Entresto improves the relative health of Cigna’s customers. The medication will be priced based on how well it reduces the proportion of customers who are admitted to the hospital for heart failures. Premier Chairperson Susan DeVore told Bloomberg News that the concept is “a little bit scary” for the pharmaceutical industry, but notes the pressure to pay based on quality and outcomes isn’t going away anytime soon. “Health systems and physicians are more interested in it today than they’ve ever been,” she says.

Many benefits managers have longed for prescription drug pricing arrangements based on value and not just volume. So the question is, are these new value-based deals just more public relations, or will they lower the cost curve? While the number of arrangements is increasing, they remain limited to selected drug categories, and may not put a dent in drug spending in the near term. Insurers, PBMs and drug manufacturers report that the complexity of accurately tracking patients’ health can be a barrier to measuring outcomes and value. For example, people change jobs and leave the data base. And, even if the data is clean, are we destined for a battle of the numbers and the assumptions. For example, even if a new multi-thousand dollar medication can significantly reduce cholesterol, can it create enough value to pay for itself via avoided cardiac events?

Remember, no business will intentionally do anything that diminishes its ability to maximize its profits. If a PBM or insurance carrier approaches us with a value-based drug deal, we should listen, inspect and inquire with special vigilance. When we see drug manufacturers and PBMs willing to use “value” in their pricing models, should we wonder if we’re being co-opted? They aren’t doing this for us, or our plan members, even if it helps 401(k) investment results.